Towards the first release of Turbo-geth

It has been more than two years since turbo-geth project started. Now we are almost there. This post will explain the criteria we will use for determining when the release is ready, and what to expect from turbo-geth in its first release. First, we will describe the current limitations (compared to other Ethereum implementations), and then go over things that are the reason for turbo-geth to exist - performance and architecture.

When is it going to be ready?

It is now ready for public alpha stage. We encourage people to try it out, and talk to us about results, and report issues. Though the sync (and with it, the creation of the initial database) with the Ethereum main net has been massively improved due to the new architecture, it still takes non-trivial amount of time (several days).
We call this new architecture “staged sync”, and it will be explained in more detals further down.

When are we going from “alpha” to “beta”?

Currently, the main criterion for us to go from alpha to beta is the (somewhat subjective) understanding of how “in control” of code our team is. At this moment the feeling is that we are mostly in control (meaning that we can identify and debug issues without too much digging into some unknown code), except for certain parts that pertain to devp2p, downloading of headers and blocks, and reactions on the new blocks. The code we are currently using has not been designed for staged sync architecture, and assumes that all “stages” are happening concurrently. Therefore, this code does much more than we need, and is unnecessarily complex for what we actually need. We also often experience stalling sometimes.
In order to address this, we have started a redesign of block header downloading, which should result in a more suitable, better understood code Here is current Work-In-Progress documentation (which is also accompanied by a Proof Of Concept implementation and tests): https://github.com/ledgerwatch/turbo-geth/blob/headers-poc/docs/programmers_guide/header_download.md

We would like to keep concentrating on developing and optimising the code, therefore we will not be publishing any binaries. Our first users would need to build from source. This may change in the future, if we find it being crucial.

No fast sync, warp sync or any other snapshot sync

In the first release, the only way to synchronise with the Ethereum network will be to download block headers, download block bodies, and execute all the blocks from genesis to the current head of the chain. Although this may sound like a non-starter, we have managed to make this process very efficient. As our next steps, we would like to develop a version of snapshot sync, which is as simple as possible (as simple as downloading a file from a torrent), initial description and discussion can be found here: https://ethresear.ch/t/simpler-ethereum-sync-major-minor-state-snapshots-blockchain-files-receipt-files/7672

Work is underway on the initial code that will utilise BitTorrent for downloading headers and blocks.

Since turbo-geth is a derivative of go-ethereum, it inherits General Public License 3.0. We will not be able to relicense the code at any point, but we may, in the future, shift some or all parts of the functionality into external libraries that would be released under more permissive licenses than GPL3.

Licence and language migration plan (out of scope for the release)

This would be an experiment which goes beyond technical, but it is rather trying to find out whether it is possible to build a financially sustainable operation around a product like Ethereum implementation. So far very few had tried and we do not see a lot of success. Lots of people believe that this lack of success has to do with the limitations of the GPL licence:

We would like to try to get to Apache 2.0 licence. But that means basically re-writing the product. And we do not see a good way of re-writing turbo-geth in Go without a lot of “rewriting for rewriting sake”, which is likely to be counterproductive. Also, going “into a cave” again and re-writing it from scratch is not something we would like to do. I would prefer gradual migration of the product that always works - in my experience this approach has much fewer risks. C++ seems to be a good first target for migration, for a few reasons:

Work is underway to convert certain stages of the sync process to C++.

Separation of JSON RPC and future of architecture during migration

Presently, turbo-geth, like go-ethereum runs most of its its functionality in a single, monolithic process. We have started some experiments on separating the JSON RPC functionality out into a separate process (RPC daemon), to support more flexible scaling of “JSON RPC farms”. We are planning to experiment with separating out another networking component, which is currently handling peer discovery and devp2p, into a separate process, called Sentry. The resulting architecture would look like this: 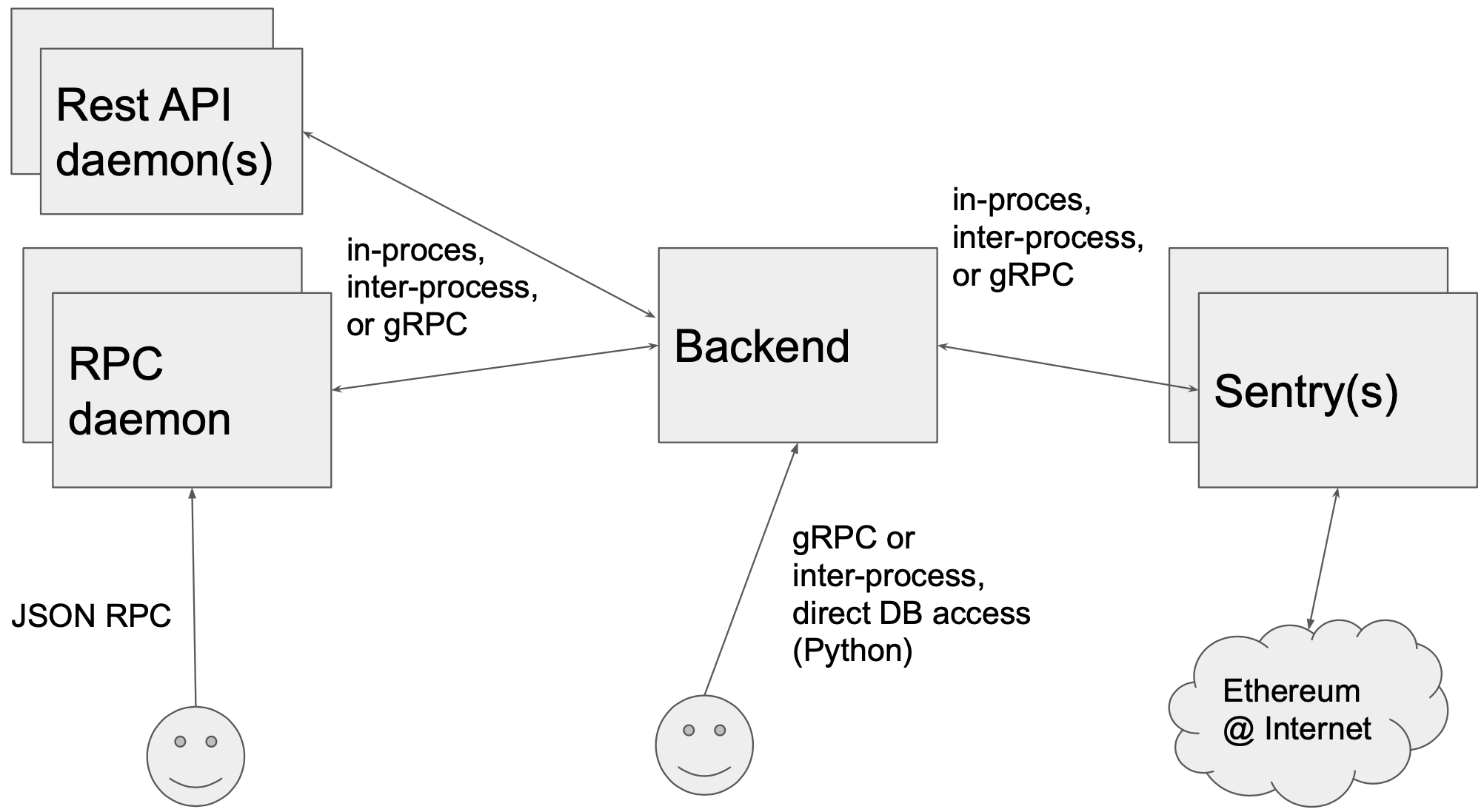 When we migrate, we will first migrate the backend, and leave RPC daemon and the Sentry using Go, and decide on their migration plans at later point.

It is mostly derived from go-ethereum, with some changes. Some methods will not be supported in the first release, for example, eth_getProof. It is possible to implement eth_getProof, and we have the implementation that works correctly, but very slowly. We do not currently consider it a big enough feature to delay the first release for. In the method debug_accountRange, turbo-geth will also be slower for the historical blocks that are very far away in the past. In methods debug_accountRange and debug_storageRangeAt, the order in which turbo-geth returns items is different from the order in which go-ethereum returns the same items.

Since these tests were done, the state and the history database format have changed again, therefore the RPC methods will need to be modified/fixed and re-tested again. The following section will be used to track the fixes and retests for these API methods.

We did not routinely test on Ropsten, Görli, or Rinkeby, but we did some spot checks and they appear to be working with turbo-geth

Chart below shows approximate allocation of disk space between various buckets (you can think of them as tables in the database). 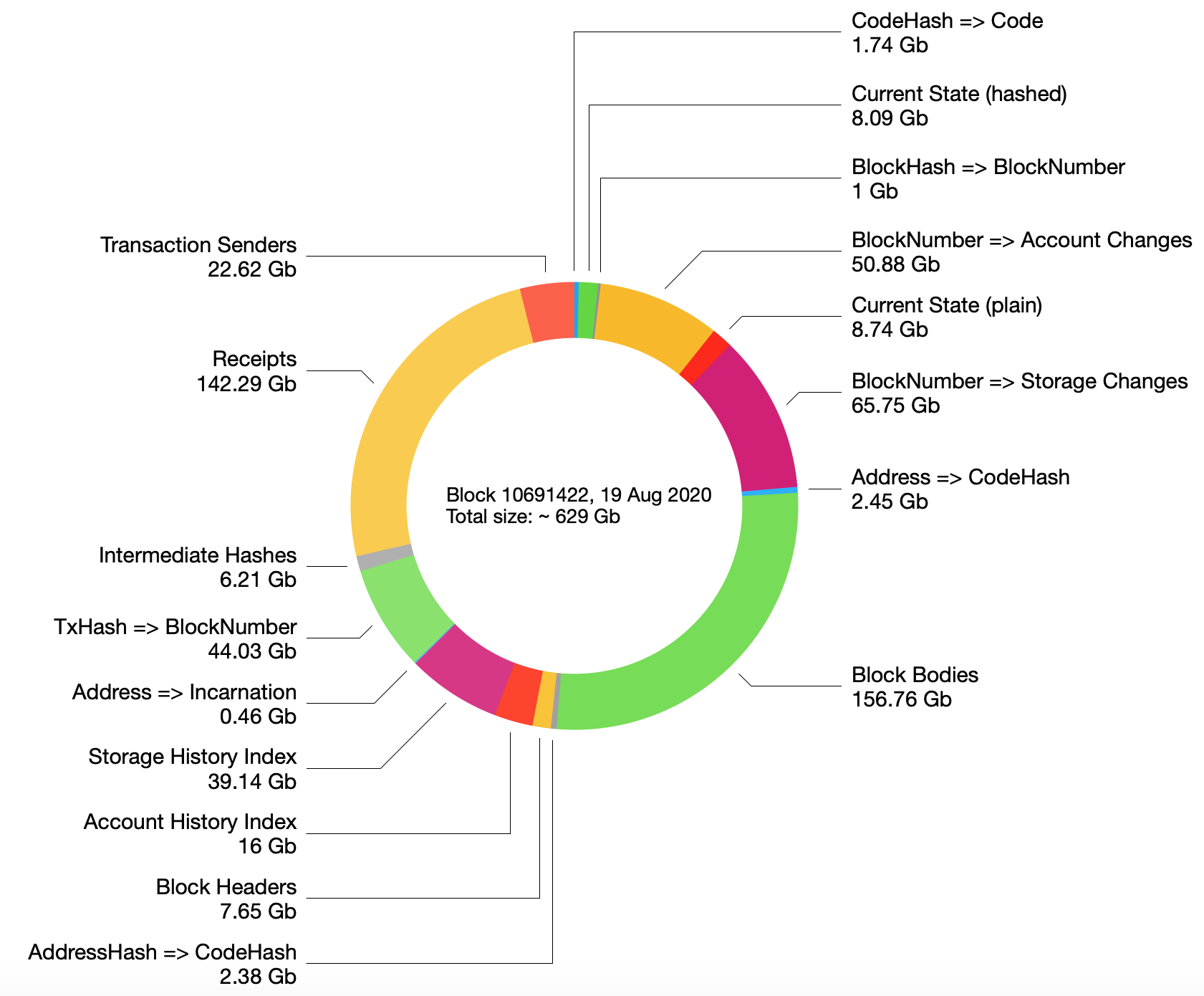 The picture above shows the total size of the database as 629 Gb, although the sum of all buckets is actually 576 Gb. We are still not sure why, most probably we forgot to include a 53 Gb bucket in the picture.

Two state buckets and no preimages

You may see that there are two buckets containing the state, one with original keys (account addresses and contract storage locations), another - with “hashed” keys. Although it might seem like a waste of space, you may also notice that there is no “Preimage” bucket that we had before. The size of preimage bucket would be roughly the same as the size of the state bucket. Why there is no preimage bucket? Because now all queries (JSON RPC, or Rest API) about accounts and contract storage can be answered from the un-hashed state bucket, without any need of preimages. Not only it is more efficient, but also allows some functionality not easily available with the “hashed” stage + preimage combination. One example is autocompletion search for addresses that you might have seen on etherscan: 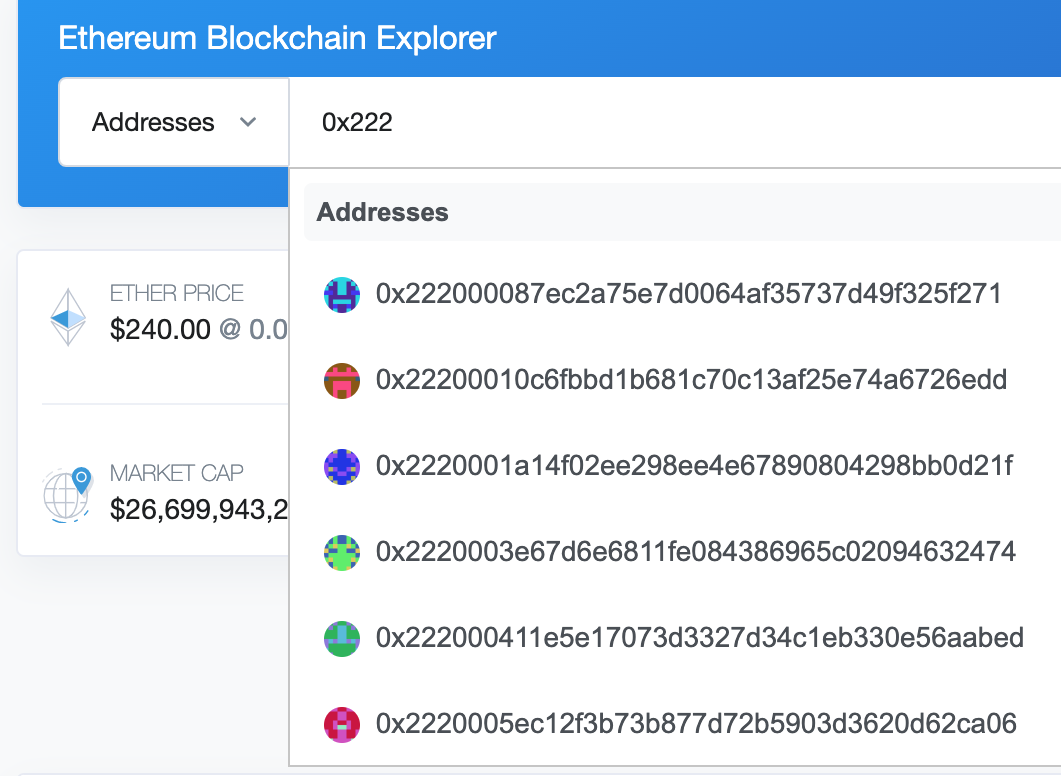 You might imagine that etherscan has to maintain the list of currently active addresses to suport this, and in turbo-geth it will be built-in.

There is another way in which the un-hashed state will prove to be useful. When the snapshot sync is implemented, it is most likely be transmitting the state keys in an unhashed form, so that the receiving node can have the same advantages as the sending node, without having preimages (snapshot sync protocols do not transmit preimages).

So-called full-sync, or its variant archive-sync is performed by downloading all historical block bodies and replaying all transactions contained in them. Traditionally, in go-ethereum, downloading the bodies and replaying transactions happens concurrently with other activities, like verification of Proof-Of-Work in the block headers, recovery of transaction senders from their signatures etc. In turbo-geth, we have recently taken a different approach. We tried to maximally decompose the sync process into stages, and perform them sequentially. From the first sight, it might sound like a bad idea - why not use concurrency? However, we noticed that running many things concurrently obscured our ability to profile and optimise code - there is simply too much going on. Decomposition allowed us to optimise each stage in separation, which is much more tractable. We also noticed the benefit of improved code structure.
Another interesting insight became apparent when we engineered the decomposed staged sync. We could decouple the execution of transactions from computing and verifying state root hashes. Before staged sync, the computation of state root hash and its verification would happen for every single block, and this is where we saw the biggest performance drag. At the same time, we knew that nodes that fast-sync or wrap-sync, only perform such verification on the state snapshot they are downloading, and subsequent blocks after that. We took similar approach in our staged sync - in one stage, we replayed all historical transactions, advancing the current state, and only verifying receipt hashes for each block. When the state is advanced to the head of the chain, we compute state trie, verify its root hash, and take it from there. This approach allowed for the drastic reduction of the sync time.

At the moment we envisage about 14 stages in the “staged sync”, but more stages are likely to be added as a way of plugging more functionality. The first stage completes before the second one is started. After the last stage is complete, the control comes back to the first stage, and so on.

There might be more stages added in the future.

Readiness of the stages, and an alternative plan

When experimenting with the staged sync (as described in the previous section), and decomposing the transaction execution into a separate stage, we finally saw something really “promising” in the CPU profile - EVM execution became the main bottleneck, followed by the golang garbage collector. In order to quickly reduce the allocations happening inside the built-in go-EVM, we decided to integrate evmone (https://github.com/ethereum/evmone), C++ implementation of EVM, and re-profile. This allowed us to see more clearly the allocation spots outside of EVM, and also get some experience with EVMC (C-interface to EMVs, https://github.com/ethereum/evmc) and evmone. At the moment, support for EVMC is experimental, because it still have serious performance limitation.

For most of the history of turbo-geth, we used a modified version of boltDb as the primary database backend.
Then we have also started experimenting with LMDB. We managed to find a configuration in which our integration with LMDB performs on par with boltDb (our version). Long iterations perform better than with BoltDB. Turbo-geth now uses LMDB by default, which bolt available as an option. We had a preference for LMDB, because it is actively maintained unlike BoltDB, and it might be a good starting point for gradually migrating functionality from Go to C++. It is likely that we abandon boltDb in the near future.
More recently, we started to think that it might be possible to achieve reasonable performance on high-latency devices even with B+tree databases.

Expand allBack to topGo to bottom

Expand allBack to topGo to bottom